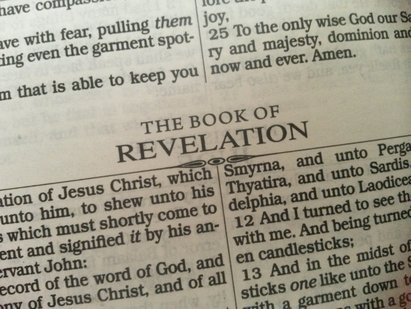 Note:  All scriptures are quoted from the New International Version (NIV) of the Bible unless otherwise noted.

The primary purpose of the book of Revelation is:
The seven letters to the Asian churches:
They note:
The churches are to share the ultimate glory of her divine LORD.

The church is to be reminded and assured that this LORD is an abiding, personal Presence.

The church must:
John speaks as to his exile on the island of Patmos (the barren, rocky, sun-scorched prison which stood in the Aegean Sea some seventy miles southwest of Ephesus.) He is here because of his witness to the gospel message or "for the word of God and the testimony of Jesus."

Revelation 1:10-11 (NIV)
10 On the Lord’s Day I was in the Spirit, and I heard behind me a loud voice like a trumpet, 11 which said: “Write on a scroll what you see and send it to the seven churches: to Ephesus, Smyrna, Pergamum, Thyatira, Sardis, Philadelphia and Laodicea.”

There were other Christian churches in Asia; however that only seven are selected indicates that these are symbolic of the church universal.

These are the characteristics of the church in all ages, and gives messages of warning and encouragement to every local church and to every individual member, during all the coming years, until the return of Christ.

Revelation 1:12-16 (NIV)
12 I turned around to see the voice that was speaking to me. And when I turned I saw seven golden lampstands, 13 and among the lampstands was someone like a son of man, dressed in a robe reaching down to his feet and with a golden sash around his chest. 14 The hair on his head was white like wool, as white as snow, and his eyes were like blazing fire. 15 His feet were like bronze glowing in a furnace, and his voice was like the sound of rushing waters. 16 In his right hand he held seven stars, and coming out of his mouth was a sharp, double-edged sword. His face was like the sun shining in all its brilliance.

Such a lampstand was an accepted Old Testament symbol of the people of God:
So here the "seven golden candlesticks" represent the church of Christ, which is divinely appointed to be the light of the world.

He stands among the churches ready to reprove and to protect, to punish and to reward.  He is described by John as follows:
The right hand holding the seven stars shows the angels of the churches to be under the absolute control of Christ and under his protecting care.

The sharp sword proceeding out of his mouth is an image of his word of judgment which can punish and destroy, which none can resist or escape.

The countenance like the unclouded sun symbolizes the heavenly glory and majesty of Him upon whom, with unveiled face, none could dare to gaze; thus the vision is not of One who is all tenderness and mercy, but of One who also is ready to punish, to judge, and to destroy.

No wonder that at such a vision of Christ, John "fell at his feet as one dead!"

Every vision of divine purity and majesty and power inspires awe and reverence and holy fear.

Yet Christ is full of compassion and love.  For all who are penitent and humble there is not only pardon, but there are words of cheer and there is a task assigned.

The letters to the seven churches are composed where each one consists of seven parts:
The prophet penetrates into the moral and religious life of each church and paints a picture which is distinct.

The seven churches combined furnish the characteristics to be noted in the universal church; however an actual church then existed in the province of Asia and possessed the features set forth in the letter to that particular church.

There was also some relation between the character of each church and the city in which it was located.

JESUS MOVES ABOUT AMONG ALL THE CHURCHES -
READY TO REPROVE, TO RESCUE, AND TO CONTROL.

The following sharp contrast is paraphrased from The Great Prostitute commentary on Revelation 17:1 in The Full Life Study Bible by Donald C Stamps, New International Version, 9/1/92, Life Publishers/Zondervan.  Liberty was taken to copy, paraphrase, and reformat the information to make points and present the information in an understandable manner.

PICTURE OF THE SHARP CONTRAST:

The Bride of Christ compared to The Great Prostitute - Religious Babylon (encompasses all False Religions, including Apostate Christianity.)

[In the Bible prostitution and adultery, when used figuratively, normally denote religious apostasy and unfaithfulness to God and signify a people who profess to serve God while actually worshiping and serving other gods.]

Revelation 19:6-8 (NIV)
6 Then I heard what sounded like a great multitude, like the roar of rushing waters and like loud peals of thunder, shouting: “Hallelujah! For our Lord God Almighty reigns.7 Let us rejoice and be glad and give him glory! For the wedding of the Lamb has come, and his bride has made herself ready. 8 Fine linen, bright and clean, was given her to wear.”
(Fine linen stands for the righteous acts of God’s holy people.)