The Church at Smyrna 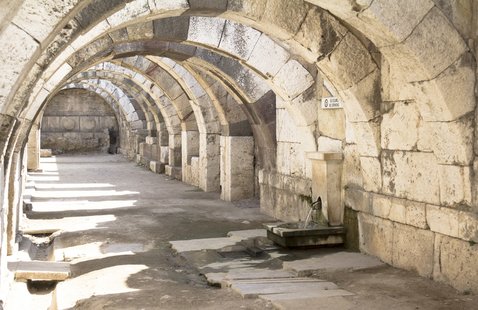 Agora (public gathering place) of Smyrna in Izmir, Turkey
Some of the following text was paraphrased from Revelation:  Baker Exegetical Commentary on the New Testament by Grant R Osborne, Baker Publishing Group, 11/01/2002.  Liberty was taken to copy, paraphrase, and reformat the information to make points and present the information in an understandable manner.


It is natural that this church should be addressed next.  This city lay only forty miles to the north of Ephesus and was second only to Ephesus in position and importance.

Because of the charm of its location and the attractiveness of its appearance it was known as "The Beauty of Asia."

It was wealthy, prosperous, dissolute (degenerate, immoral, depraved) and famed as a center of emperor worship.

Its large number of Jews were bitter opponents of Christianity.  This church was known as the "suffering church"; so to this church (the martyr church) comes a word of cheer from the Lord who has triumphed over death and the grave.

Their "tribulation" was severe and probably produced their "poverty," open assault being united with a spoiling of their goods, with vilification (criticism, back biting, defamation) and slander.

This form of "blasphemy" is attributed to Jews who were such in name only.  In reality they were a group which was the instrument of Satan.

Worse trials were to come.  "The devil is about to cast some of you into prison, that you may be tried; and you shall have tribulation ten days."

Tribulation will deepen into martyrdom.

8 “And to the angel of the church in Smyrna write,‘These things says the First and the Last, who was dead, and came to life:  9 “I know your works, tribulation, and poverty (but you are rich); and I know the blasphemy of those who say they are Jews and are not, but are a synagogue of Satan. 10 Do not fear any of those things which you are about to suffer. Indeed, the devil is about to throw some of you into prison, that you may be tested, and you will have tribulation ten days. Be faithful until death, and I will give you the crown of life.
11 “He who has an ear, let him hear what the Spirit says to the churches. He who overcomes shall not be hurt by the second death.”’

What is the encouragement to them and to all believers because of their loyalty to Christ:


Poverty: (Gk ptocheria) means "having nothing at all”.  They were economically destitute, yet Jesus said they were spiritually rich.

The following is paraphrased from From Matthew Henry Commentary on the Whole Bible on Revelation 2, vs 9 (http://www.biblestudytools.com/commentaries/matthew-henry-complete/revelation/2.html)  Liberty was taken to copy, paraphrase, and reformat the information to make points and present the information in an understandable manner.

This is a lying spirit sent forth from Satan to infiltrate the Church and give birth to the Harlot.


In other words they can have it their own way; they can sit on the throne and guide their own lives.  They can be as God!

These are worldly Christians (like Nicolaitans) who worship this world while claiming to be Christians.