The Church at Ephesus 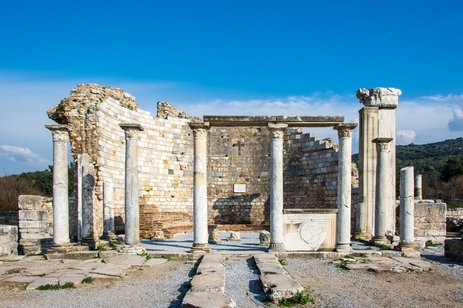 Church of Mary at Ephesus
Note:  Some of the following text was paraphrased from Revelation:  Baker Exegetical Commentary on the New Testament by Grant R Osborne, Baker Publishing Group, 11/01/2002.  Liberty was taken to copy, paraphrase, and reformat the information to make points and present the information in an understandable manner.

​
It was natural that the first church to be addressed was the church in Ephesus.  This city was the capital of the province and its chief commercial and religious center, and was called "The Light of Asia."

Revelation 2:1-7 (New King James Version)
The Loveless Church
1 “To the angel of the church of Ephesus write,
‘These things says He who holds the seven stars in His right hand, who walks in the midst of the seven golden lampstands: 2 “I know your works, your labor, your patience, and that you cannot bear those who are evil. And you have tested those who say they are apostles and are not, and have found them liars; 3 and you have persevered and have patience, and have labored for My name’s sake and have not become weary.
4 Nevertheless I have this against you, that you have left your first love. 5 Remember therefore from where you have fallen; repent and do the first works, or else I will come to you quickly and remove your lampstand from its place—unless you repent. 6 But this you have, that you hate the deeds of the Nicolaitans, which I also hate.
7 “He who has an ear, let him hear what the Spirit says to the churches. To him who overcomes I will give to eat from the tree of life, which is in the midst of the Paradise of God.”’

The church in Ephesus is warmly praised for its "toil and Patience," for its hatred of evil men, and for its refusal to accept false teachers who came in the guise of apostles.

They were steadfast. For the sake of Christ (his name's sake) the church had labored in opposition to those who would have corrupted the gospel and did not grow weary.  The outstanding virtue of the Ephesian church was their loyalty to the truth.

The church had fallen into the temptation to which defenders of the faith are peculiarly exposed, namely, that of censoriousness (harshly critical), suspicion, bitterness, factiousness (dissentious).

The rebuke is severe: "Nevertheless I have this against you, that you have left your first love."  This love was love for Christ and love for fellow Christians.  These are inseparable!

Zeal for pure doctrine easily degenerates into hatred for those who differ in their beliefs.

It is possible for a church to be sound in doctrine and patient under persecution, and yet to be guilty of having left the love which it once displayed.

The hate for the Nicolaitans sect was that they allowed and practiced positive immorality on the ground of spiritual liberty.

The Christian life will always be a conflict.. to foes of sound doctrine.

Each one must have:
AND HE WILL RECEIVE AS HIS REWARD, LIFE IN ALL ITS FULLNESS.